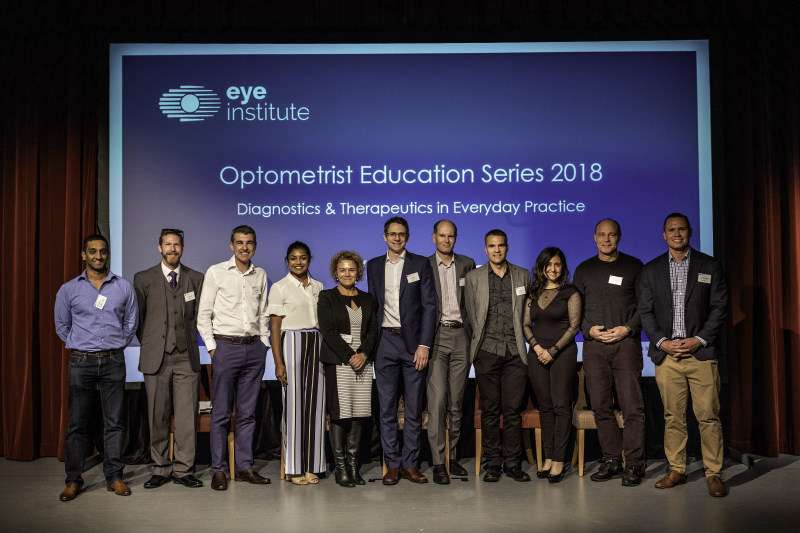 This year’s Eye Institute conference featured guest speaker Professor Joanne Wood, from the Institute of Health and Biomedical Innovation at Queensland University of Technology, and showcased some of the newer members of the team alongside those we have come to expect at this annual event.

According to Prof Wood, the number of citations for vision and driving research has tripled since 1980, showing the need for greater understanding of this complex subject to assist in formulating policy and advising patients. The research objective of primary interest to optometrists is to better understand how visual impairment and ageing impact on driving performance in daytime and night-time or other adverse conditions. Other objectives include identifying best predictors of unsafe driving to develop interventions that can potentially extend safe driving as long as possible.

It was interesting to note that although drivers with cataracts will often self-regulate their driving, the rate of accidents in this group was two-and-a-half times higher than in the control group. Following cataract removal from one eye, however, their crash risk halved and was further reduced after the second cataract surgery. Visual acuity, glare sensitivity and contrast sensitivity measurements before and after surgery showed increased contrast sensitivity was the major factor improving driving ability.

Prof Wood’s research simulated cataracts, visual field loss and blur in young and older drivers and in daytime and night conditions. Glaucoma, age-related macular degeneration (AMD) and presbyopic corrections, such as multifocal contact lenses, as well as Parkinson’s and Alzheimer’s diseases were also investigated. The impact of environmental conditions of pedestrian or cyclist visibility, clothing, glare, clutter and streetlights were another major part of Prof Wood’s research and discussion.

Comparing drivers with hemianopia or quadrantanopia resulted in 73% with hemianopia and 88% with quadrantanopia being assessed as being as safe to drive as the controls. Where significant differences were recorded, it was in lane position, steering steadiness and gap selection. Safe drivers were shown to look more into the blind field, while unsafe drivers looked and steered more into the seeing field.

Comparing drivers with glaucoma with age-matched controls rated the glaucoma group as slightly less safe than controls. The tests that proved most predictive of driving safety in this group were motion sensitivity, colour choice reaction time and postural sway. Not surprisingly, visual acuity was a poor predictor of driving safety.

Night-time pedestrian or cyclist visibility was shown to be maximally enhanced by retro-reflective markers placed on the moveable joints, such as ankles for cyclists and elbows, knees and ankles for pedestrians. Reflective strips on the torso alone were not nearly as effective as those on moving parts.

Older drivers had poorer recognition ability with only 58% of pedestrians being recognised and reacted to at half the distance of a younger driver’s response.

The overall conclusion was that licensing should be based on performance rather than age or disease status.

In her second presentation, Prof Wood explored the relationship between vision and academic performance, the role of vision screening in school-aged children, the correlation between visual anomalies and learning outcomes and the visual demands of the learning environment.

Unsurprisingly, studies of screening based on distance visual acuity have little value in identifying visual issues such as non-strabismic binocular vision anomalies, uncorrected hypermetropia, abnormal ocular health and colour vision defects. Her studies showed that uncorrected refractive errors impair academic performance, with the effect being exacerbated by sustained near work. Children who failed vision screening had the worse performance at school, with the most relevant skills being visual sequential memory and symbol search while, most significant of all, was a low score on developmental eye movements, which had the highest correlation with reading speed and accuracy. Her conclusion: school vision screenings need to measure a range of visual performances and further work is needed to determine minimum levels requiring correction to inform prescribing guidelines.

The advantage of deep sclerectomy over other glaucoma treatments appears to be that it is non-penetrating which means less inflammation, infection risk and scar tissue. There are three areas for fluid outflow and the procedure can be staged as outflow is monitored, also reducing the risk of hypotony. It is only suitable for patients with open angle glaucoma, but post-operative care requires fewer visits for monitoring. It also reduces the cost as no stent is required and the procedure can be done in conjunction with cataract surgery. Studies in the UK showed a 20% reduction in pre-operative intraocular pressure (IOP) without further treatment.

The downside of deep sclerectomy is that it is difficult to master the surgical technique, it is not suitable for angle closure glaucoma and there is not much data available yet for Polynesian, Asian or Indian populations. However, with the knowledge and enthusiasm of Dr Perumal, I am sure she will soon address that and we look forward to hearing more.

Another new face at the Eye Institute, Dr Ben LaHood, revealed his obsession with posterior corneal astigmatism and the joy of detecting and regularising irregular astigmatism. Most of us managed to lose this obsession within the academic walls of optometry school, but then we didn’t have tools such as laser refractive techniques and cross-linking, even if we had untangled the maths involved and taken technicolour topography maps.

According to Dr LaHood, topographically-guided laser treatment possibly combined with cross-linking may be the answer to those bowed and bumpy corneas or small aperture intraocular lenses (IOLs) where the pinhole reduces the spread of aberrated rays.

Among other speakers, Dr Jay Meyer, a senior lecturer in ophthalmology at the University of Auckland and another relatively recent addition to Eye Institute, presented a case-based revision of herpes zoster ophthalmicus and its nasty complications, while Dr Graham Reeves went about fat-shaming corneas with the limitations of various methods of measuring IOP when corneas are rigid, stiff or just plain fat.

Dr Reeves wrapped up the day by reminding us the patient’s perception of glaucoma is not the same as those who administer the treatments. A US study showed 51% of glaucoma patients are sceptical about glaucoma causing vision loss and 51% are sceptical glaucoma treatment helps to prevent vision loss. I wonder if this is the same 51% and who they voted for in the recent elections.