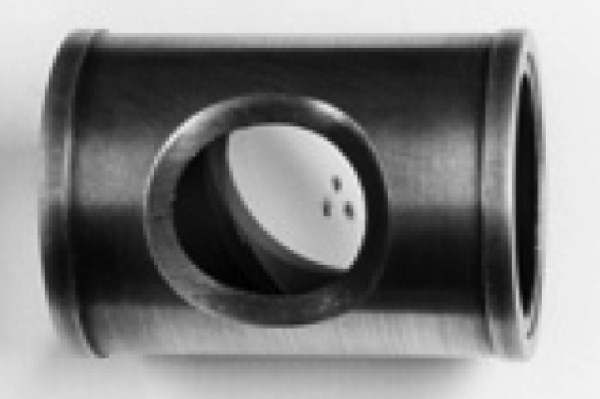 In the early 19th century, the common hypothesis was that some ophthalmic diseases came from “inside the eye”, but there was no reliable way to view a retina safely. The red flex was the only sign to look for and it was done with the patient in a prone position on a bed and the clinician in a supine position holding a candle. It was not until 1851 that Professor Hermann von Helmholtz invented the ophthalmoscope. He called it an augenspiegel or “eye mirror”.

In 1847, mathematician and inventor Charles Babbage was the first to construct an instrument for retinal examination. The “Babbage ophthalmoscope” (Fig. 1) was optically close to the modern-day direct ophthalmoscope, but ophthalmologist Dr Thomas Wharton rejected Babbage’s invention as of little value, describing it as a ‘plain mirror’. Little did he know that it could have worked with the addition of a -4 or -5 diopter lens inserted between the observer’s eye and the back of the plano mirror from which two or three holes had been scraped. 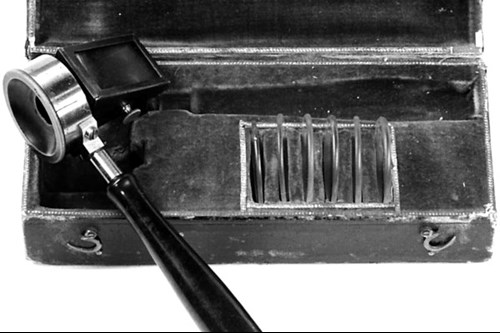 Hermann von Helmholtz, however, recognised there were three principles to be solved to view the retina effectively: the eyes of the observer and the patient had to be emmetropic; the retina must be illuminated; and the light source and the observer’s pupil had to be aligned. He presented his revolutionary design to the Berlin Physical Society in 1851.

His ophthalmoscope (Fig 2), consisted of a superimposed glass plate held at an oblique angle to the light with loose concave lenses to correct the refractive error between the patient and the observer. The superimposed plates were both reflective and transparent; a pre-cursor to the modern day linear beam-splitter. 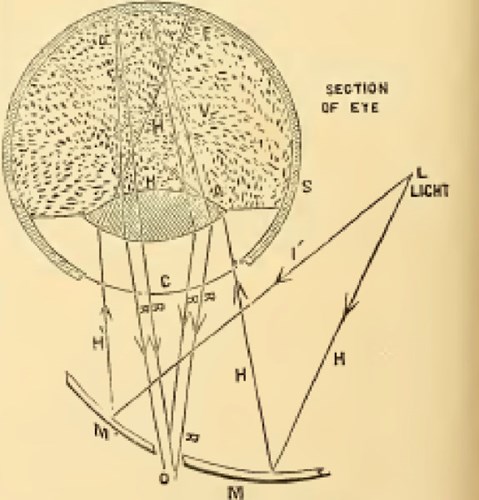 The ophthalmoscope has since undergone multiple revisions, modifications and innovations. By 1913, there were over 200 models produced, with Helmholtz’s optical principles remaining the basis for fundus photography. In 1886, Jackman and Webster were the first to publish photographs of the retina, using an Argand gas burner with a reflector as the light source and orthochromatic plates to produce the retinal photographs (Fig 3). They managed to capture an image of the optic disc with some blood vessels, though the image suffers from unwanted corneal reflection (Fig 4). 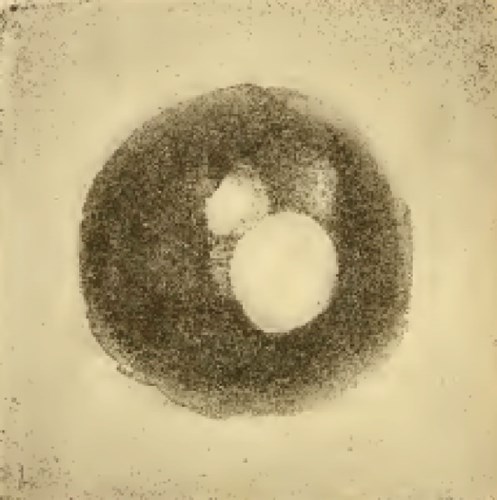 Fig 4. Retinal image: the smaller white area is the optic disc and the larger white circle the reflection from the cornea. Source: The Philadelphia Photographer Journal.

Others including Dr Oswald Gerloff in 1891 and Dr Walter Thorner in 1899 made minor improvements, but images still retained severe artefacts until 1925 when Carl Zeiss produced the first commercially available fundus camera using a design pioneered by Dr Nordenson from Stockholm. The Zeiss-Nordenson camera became the first widely-used fundus camera.

In the 1940s, Dr Bedell recognised the importance of and presented the first colour fundus photographs. The next major innovation came in 1953 when Hansell and Beeson successfully attached an electronic flash tube to the camera. Minor innovations followed, such as better optics, wider field-of-view and increased portability, but it wasn’t until 1975 that Steven Sasson invented the first digital camera, leading to camera sensors (complementary metal-oxide-semiconductors and charged coupled devices) becoming widely used in fundus cameras. 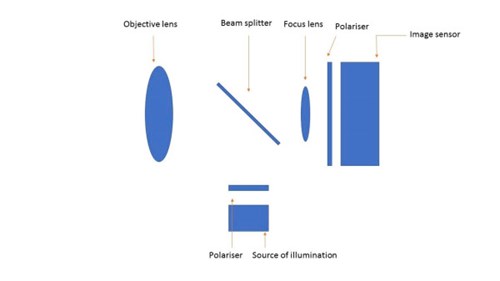 The introduction of colour fundus photography kickstarted a variety of retinal screening programmes, most notably for diabetic retinopathy. For such programmes to be effective, cameras needed to work quickly and efficiently without the need for pupillary dilation. This need led to non-mydriatic retinal fundus cameras which can be set up using infrared light, with a second flash emitted to capture a still colour photograph of the retina. 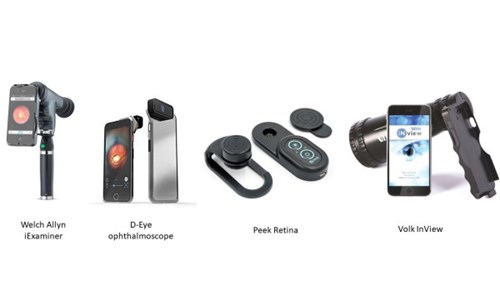 In 2013, the Food and Drug Administration (FDA) approved Welch Allyn’s iExaminer which essentially attaches an iPhone to Welch Allyn’s PanOptic ophthalmoscope and uses a mobile app to capture still images and videos of the retinas. In 2014, Myung et al from Stanford University released a smartphone retinal imaging device that was capable of capturing mydriatic retinal images with a single-hand technique and producing 3D-printed outputs.

The same year, researchers from CellScope published an article on the use of smartphones for widefield retinal imaging. Their device uses a slit-lamp condensing lens, such as a 60D lens, as its objective lens with a relay lens placed in front of the phone’s camera to focus the image, plus a cross-polarisation technique to extinguish glare and unwanted reflections.

In 2015, my company, New Zealand’s oDocs Eye Care, launched the world’s first open-source smartphone retinal imaging adapter based on the concept of monocular indirect ophthalmoscopy. The device rapidly gained popularity but due to its steep learning curve, it remained a gadget for hobbyists and travelling practitioners. In 2016, Volk released a device based on the same principle.

Italian ophthalmologist Andrea Russo subsequently published an original article comparing the grading of diabetic retinopathy between smartphone ophthalmoscopy and slit-lamp biomicroscopy using his D-Eye ophthalmoscope. This device was built to fit a variety of smartphones and uses the principle of direct ophthalmoscopy for retinal visualisation, making use of smartphones’ autofocus function to overcome common refractive errors.

Also in 2016, Toslak et al reported a novel technique of trans-palpebral illumination smartphone fundus photography without the need for pupil dilation. The described technique uses a red LED mounted at the end of a mobile probe which is then fitted onto a head-mount on the patient. The subsequent image is said to be comparable with those acquired from a standard fundus camera.

The rise of smartphone-based retinal imaging techniques and technologies have also prompted researchers to investigate their safety and efficacy. Russo et al studied 120 patients (240 eyes) with Type 1 or 2 diabetes mellitus, concluding smartphone ophthalmoscopy with the D-Eye smartphone ophthalmoscope showed considerable agreement with slit-lamp biomicroscopy for the grading of diabetic retinopathy. However, a potential conflict of interest was not initially reported.

Andrew Bastawrous et al also published a study comparing the grading of 2152 pictures of optic nerves from smartphone images and a digital retinal camera, which showed a kappa coefficient of 0.69, or an excellent agreement between the two methods. While Adam et al from Wills Eye Hospital conducted the Smartphone Ophthalmoscopy Reliability Trial (SORT) study which concluded images taken with smartphone ophthalmoscopes were of higher quality and noted that smartphone ophthalmoscopy performed better in cases where media opacity, such as cataract, is present.

Despite the exponential growth in smartphone retinal ophthalmoscopy, devices still suffer from either a limited field of view (based on the principle of direct ophthalmoscopy) or the need for pupillary dilation. Light artefacts and unwanted reflections are common with systems that use direct co-axial illumination, but can be avoided by using a ring-shaped mask for illumination, eliminating the central cornea reflex. Cross-polarisation can also eliminate reflection and glare from the back and front surface of the objective lens (Fig 7). 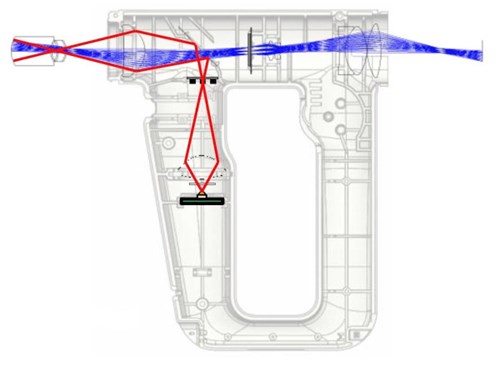 A strong plus objective lens with a wider diameter can also be used to maximise the field of view (also called monocular indirect ophthalmoscopy) but gives an image that is real but inverted, which can then be righted using prisms or an inverting telescope.

In the near future there is no doubt that the handheld ophthalmoscope will also use infrared as the source of illumination to overcome pupillary constriction and the examiner will look at the retina through a viewfinder screen similar to those in modern DSLR cameras. 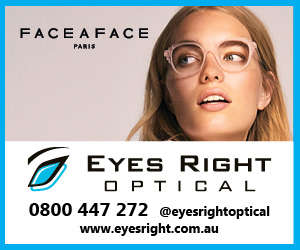