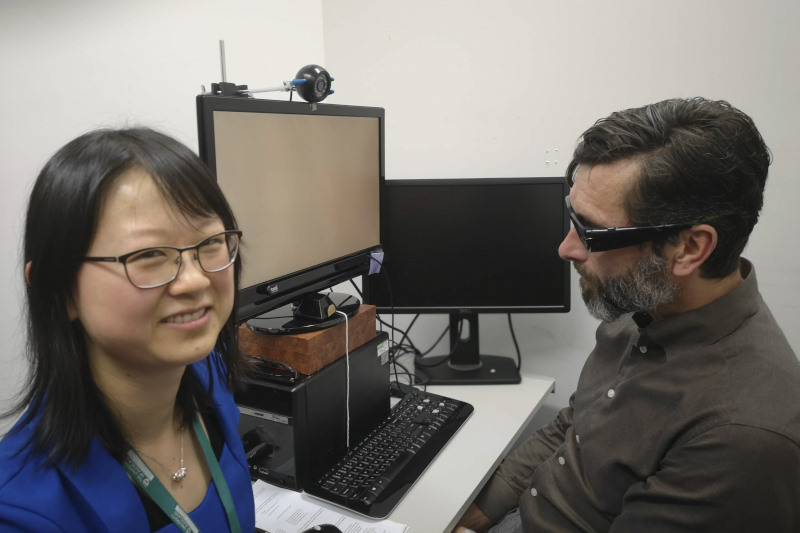 The School of Optometry and Vision Science’s (SOVS’) digital cover test uses a consumer-grade infrared eye tracker and 3D display and is based on early work by Professor Peter Bex, a psychology professor at Northeastern University in the United States. The new system can provide automatic, accurate and reliable measures of ocular deviations such as strabismus or phorias, including comitancy, said postdoctoral researcher Dr Tina Gao, who presented a poster this work at the recent Association for Research in Vision and Ophthalmology (ARVO) meeting.

“The lack of objectivity in the current standard prism cover test remains a challenge,” said Dr Shuan Dai, co-principal investigator and paediatric ophthalmologist. “As a clinician, I have always been interested in a device to make this job quicker and more accurate, so I spoke to SOVS about it. I am very excited to see the progress we have made so far.”

The devil is in the detail when it comes to objectively measuring strabismus, said SOVS head, Professor Steven Dakin who is developing the test with Dr Gao in Auckland and Prof Bex in Boston. “The gold standard for measuring ocular deviation angles is the prism and alternate cover test (PACT), in which the patient’s eyes are alternately covered with a paddle and a clinician uses the patient’s eye movements to estimate the deviation. However, this test is time consuming and its accuracy is dependent on clinician skill. Doing the test at just one direction of gaze - which is usually central - can indicate strabismus but doing it at multiple locations gives a more complete picture of the problem.”

The new system uses shutter glasses to control what each eye sees while the eye tracking device records the movements of each eye in response to stimuli on a computer screen. By analysing re-fixation eye movements when the target switched between eyes, ocular deviation direction and magnitude can be calculated. An entire nine-point comitancy screening can be completed in under two minutes and clinicians can get extra information they may not get from the prism cover test, such as fixation instability or any variability in the eye turn, said Dr Gao.

Initial study results from 32 adults (including eight with strabismus) showed the system was clinically comparable to PACT. “There’s pretty much a 1:1 correspondence with clinical measurements,” said Dr Gao. “The accuracy of a standard paddle test is about ±6 diopters for horizontal deviations. Our system showed slightly better test-retest variability and there’s potential for further improvement.” The size of the computer screen may be a limiting factor, but the test could be automatically administered by non-clinicians and was accurately repeated, she added.

There were additional benefits too, said Prof Dakin, as raw data was recorded and could be compared with clinical measurements at follow-up visits, and could be reinterpreted or reanalysed if better analysis methods became available. “It can’t accidentally switch left and right on the records, which is surprisingly common in manual note-taking.”

Example output for a participant with esotropia

Other strabismus systems currently being developed internationally include the Blinq screener, by Harvard Medical School’s Professor David Hunter. But, unlike the Blinq, the SOVS system can both detect and measure strabismus, said Prof Dakin. “I believe there isn’t anything giving as refined a measure as we’re delivering. Devices tend to be either very good clinically or very well engineered. I think we’ve got the right mix of both.”

Optometrist Evan Brown who sees a lot of children at his practice, agreed SOVS new system might offer benefits over traditional tests. Eye tracking devices were more likely to record deviation angles that approached the habituated deviation - the degree of deviation at the moment the fixing eye is covered - rather than the larger angles recorded using PACT, he explained. “The prism, left in front of the eye while measuring, alters the patient’s perception of space.” The speed at which infrared eye tracker technology could gather information could also be helpful, he added.

Researchers said the next step included improving sensitivity to detect small misalignments of the eyes, which might not be readily noticeable with a clinical cover test. They also wanted to add functionality for strabismus classification, measuring associated angles of deviation and assessing phoria recovery.

Prof Dakin said the team was constantly looking to lower the barriers that prevent clinicians using such technologies. Using consumer eye tracking and 3D displays was a good start, he said, but they would ideally like to use a laptop with anaglyph glasses (like the cardboard ones with one red and one green plastic lens) instead of shutter specs. They were also working on using standard webcams in place of the eye tracker, which would make the system even more affordable, he said.

While the researchers had looked at virtual reality as well, this might not be a good solution as it raised costs and introduced other issues, such as accommodation, said Prof Dakin.

“We obviously need to do more testing on patients with strabismus, especially children, to make sure the system is robust in its accuracy, easy to use and is child-friendly. We probably also need a larger controlled trial before we can put the device into clinical practice,” said Dr Dai.

The team is currently recruiting more participants with strabismus for the study, particularly adults and children with a wider variety of eye turns. Participant referrals or queries can be directed to Dr Gao at t.gao@auckland.ac.nz.