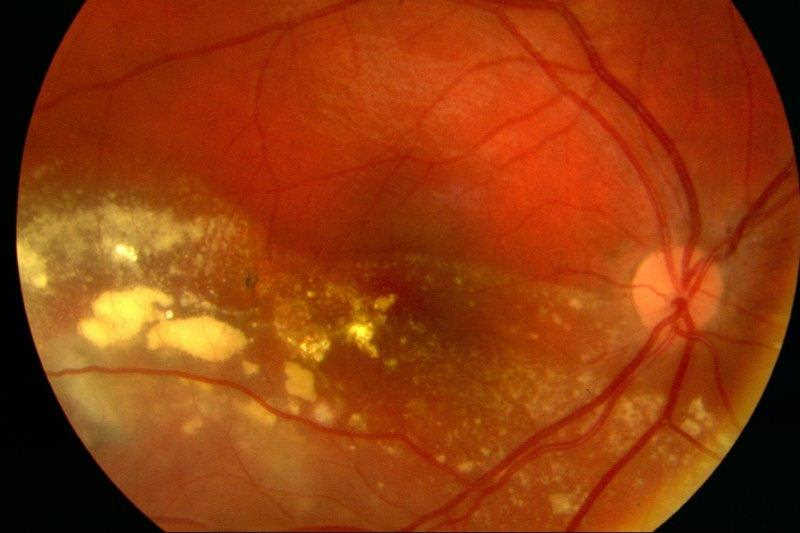 Primary or congenital retinal telangiectasia, more commonly called Coats’ disease or Coats’ syndrome, is a non-hereditary, developmental, retinal vascular disorder characterised by dilatation and exudation of the retinal vasculature, and an important cause of leucocoria in children.

A 13-year-old boy attended the emergency eye clinic with a one-day history of sudden onset loss of superior field of vision affecting his right eye. He had been trampolining the previous day.

There was no history of trauma, photopsia or floaters. He had no past ocular history and was in good general health. He was not premature and had achieved all developmental milestones.

On examination, visual acuity was 6/24+1 right and 6/4 left. He had a relative afferent pupil defect in his right eye. He was orthotropic on cover testing. Anterior segment examination was normal. Dilated fundal examination of his right eye revealed marked intraretinal exudation with an inferior non-rhegmatogenous retinal detachment and multiple large telangiectatic vessels with light bulb-shaped aneurysms (Fig 1 and 2). The left retina was normal. Indirect indentation ophthalmoscopy of his right retina did not reveal any peripheral retinal tears. Ocular ultrasound revealed no posterior segment mass. A provisional diagnosis of Coats’ disease was made. Baseline bloods, including autoimmune and infective panels, were all normal. Both parents underwent fundal examination which was normal. 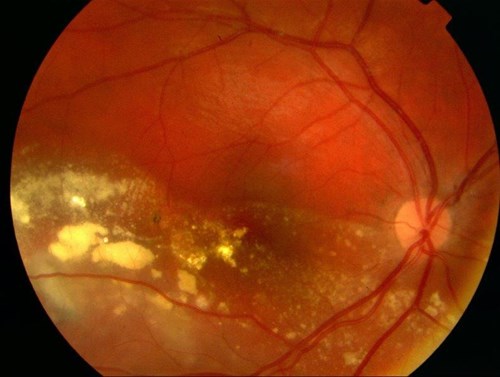 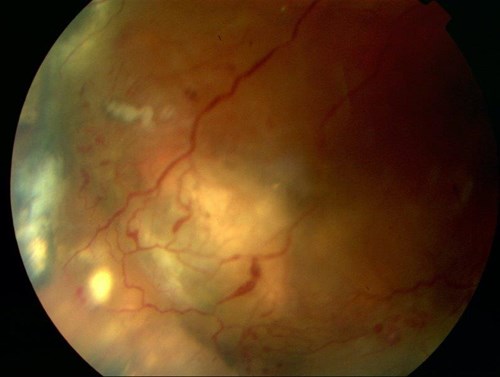 Considering the patient was very cooperative, Argon focal laser was carried out directly to the telangiectatic vessels in the right eye. The patient was seen two weeks later for further focal laser. A large degree of the exudate had resorbed with a reduction in the size of the detachment (Fig 3). Visual acuity had improved to 6/9-2. The patient had a further final episode of focal laser three weeks later. Visual acuity improved and has been maintained at 6/6 in this eye. Twelve months later the macula remains flat with peripheral subretinal fibrosis (Fig 4). There has been no reoccurrence of subretinal fluid or exudation. 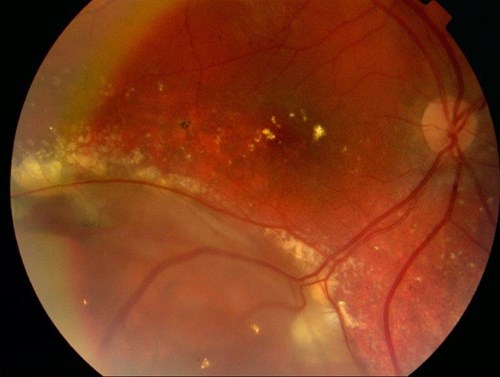 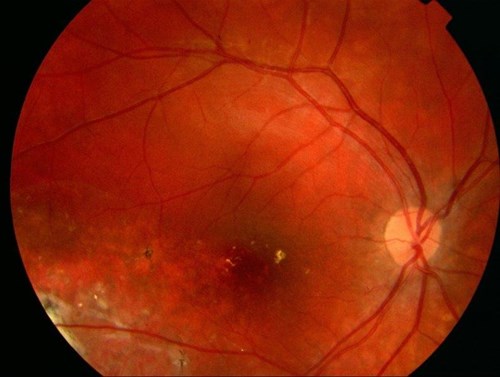 Four years later, Theodor Leber described “miliary aneurysms2,” which were quite similar clinically to the cases seen by Coats.

The term retinal telangiectasis was coined by the paediatric ophthalmologist Algernon Reese in 1956. He suggested that Coats’ disease and Lebers’ miliary aneurysms were one and the same, occurring either in child or adulthood3.

In 1968, Donald Gass described a new distinct entity which he called idiopathic juxtafoveolar retinal telangiectasis to differentiate it from Coats’ disease. This resulted in a detailed classification of all telangiectatic diseases in 19934.

Coats’ disease is a non-hereditary ocular disease. The exact underlying mechanism remains unknown but a mutation of the norrin disease protein (NDP) gene has been proposed6, as this results in a deficiency of the protein norrin which regulates vascular development in the developing retina.

The pathophysiological processes of Coats’ disease include the breakdown of the blood-retina barrier at the level of the vascular endothelium, predominantly affecting the capillaries but often with focal arterial involvement. Subsequent leakage leads to aneurysm formation and vessel blockage with exudation of blood, lipid and fibrin into the intra and subretinal spaces7. Vascular endothelial growth factor (VEGF), which plays an important role in the formation of normal retinal vessels and vascular permeability, is also elevated8.

The end result is exudative retinal detachment. Chronic detachment can involve the anterior segment secondarily and lead to neovascular glaucoma and blindness9.

Coats’ disease (Type I, aneurysmal telangiectasia) encompasses a wide clinical spectrum. At one end of the spectrum are infants and children who can have massive exudative and heamorrhagic retinopathy with total retinal detachment. Typically, severe cases tend to present below the age of fifteen years. At the other end of the spectrum are middle-aged men who have retinal telangiectasia confined to a small area of the macula presenting with distorted vision.

Treatment is based on the severity of the disease. Mild cases can be observed, but if exudation, retinal or subretinal fluid is present, the mainstay of treatment is laser ablation or cryotherapy in areas of telangiectasia and nonperfusion8,9.

Prognosis depends on disease severity at presentation. When mild, Coats’ disease typically progresses gradually and treatment can often lead to restoration of vision. Patients who present at a younger age (less than 5-years-old) have been reported to undergo a more rapid decline, while those older than 10 have a longer variable course11. Secondary complications include glaucoma, rubeosis iridis, phthisis bulbi, cataract and uveitis. 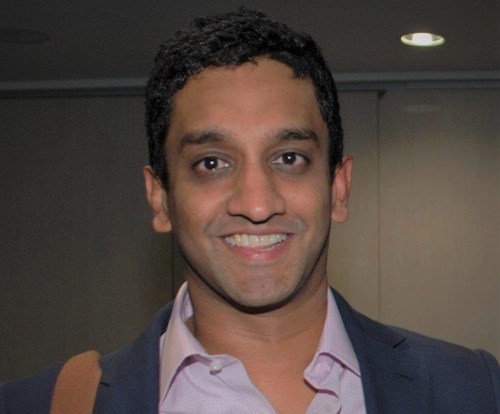 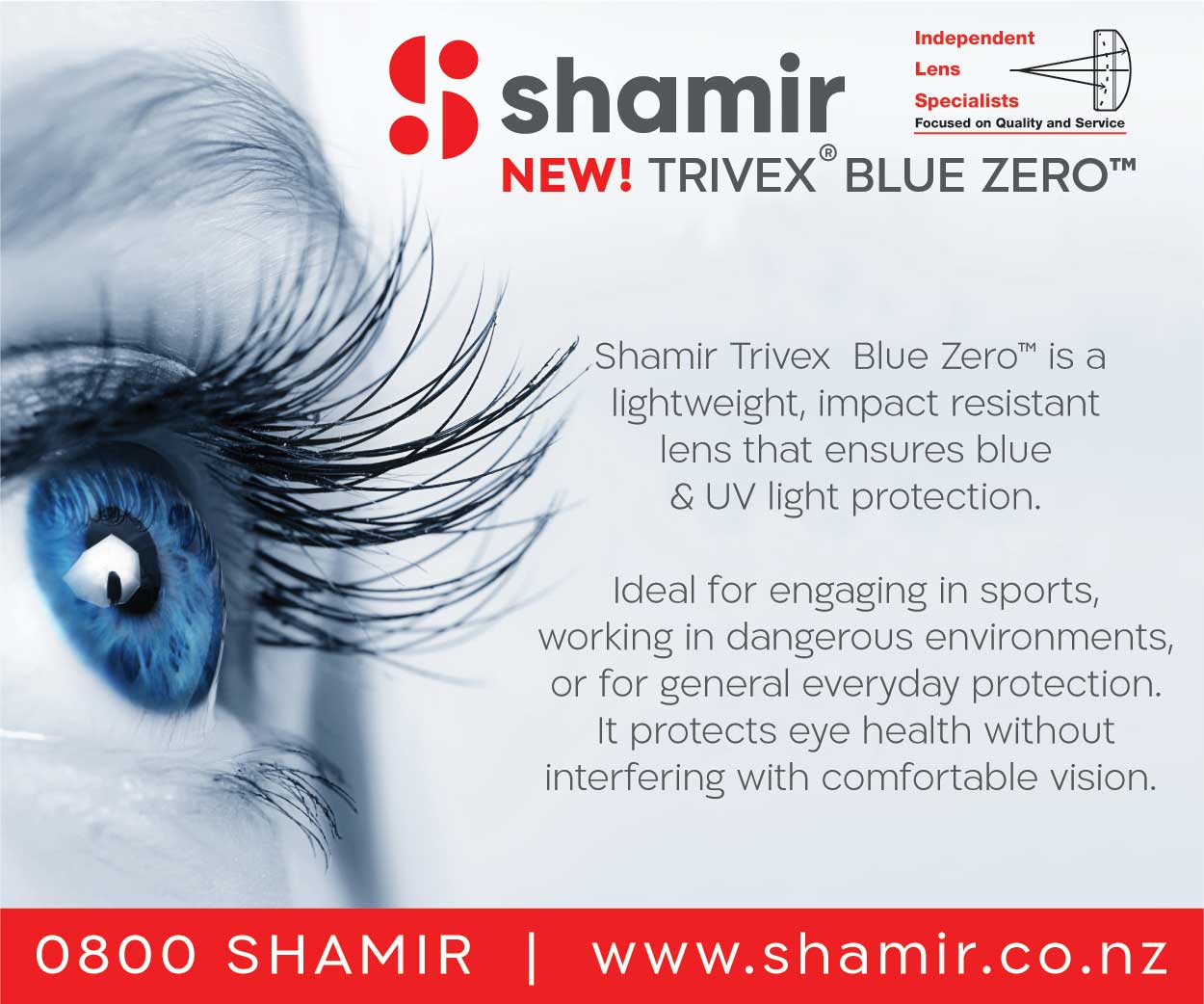 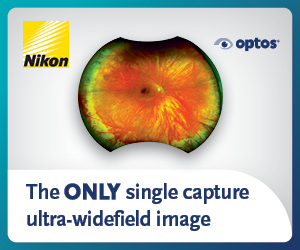 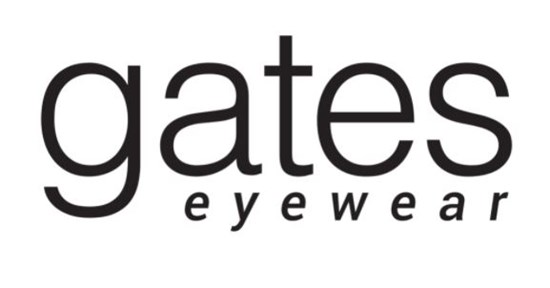 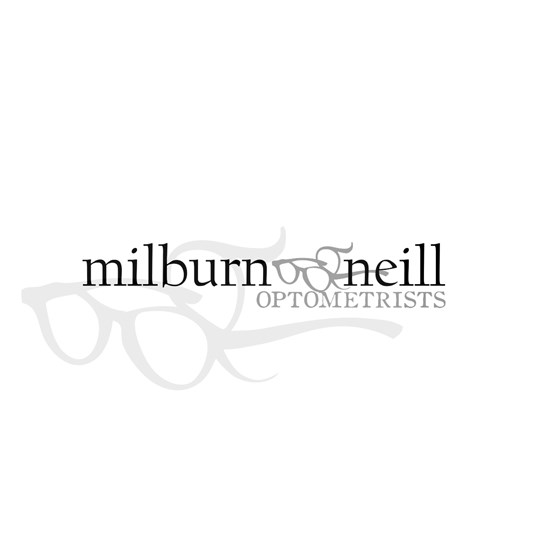